Welcome back to the Nostalgia Hour, with your host, the Ordinary Decent Gamer.  I finished up the last entry at the first big hiatus in my ring making career.  My degree had to take priority until it was finished up, but after that I was free to return to production.  My eldest brother Keith was visiting from Oregon in the USA, and brought with him a doming block from Harbor Freight, the next essential tool in my workshop.  The doming block allowed me to improve the look of the rings by straightening the slanted edges.  It also allowed smaller holes to be drilled in the coins, preserving more of the design and improving the overall aesthetics.  The “blow torch” I was using to anneal the coins was almost laughable.  It was more of a lighter than a torch, and after heavy use had begun to falter.  Early on I had experimented using the open fire to anneal the coins which worked rather well, but it was impractical to maintain a furnace to heat one coin at a time.  The jet lighter did its job, but was slow and unreliable.  The workshop came into being during Easter 2014, providing a dedicated space for me to work at coin rings. 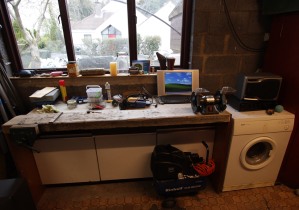 Ah, my workbench was so much tidier back then. And bereft of tools.

I had restored a bench vise that was lying outside for years, which became the main workbench, and the home of the drill press and bench grinder.  No longer would I have to sit on the floor and wedge the mandrel in a weight to stop it moving about.  I had the luxury of a vise!  I continued to use the jet lighter while I was looking for a replacement blow torch, until it died completely and halted progress.  An industrial/workshop blow torch would have been ideal, but I couldn’t afford it given the small revenue generated up until that point.  I managed to pick up a small blow torch which used camping gas cylinders. I say small, but it was a world of difference compared to the little jet lighter/blow torch I started out with.  I could anneal the coins properly in no time at all.  I had a few orders around Christmas, through Etsy and privately, and I made enough money to buy more tools.  The nice thing about this hobby is that it has been self-sustaining so far.  I bought the arbor press and ring enlarger to finish off my workshop, and now it’s a hell of a lot busier looking than in the picture above.  I have been trying to push the business as much as I can, leaving off business cards and trying to improve my Twitter and Facebook presence.  I have even ordered a card reader from iZettle so people can pay me by card.

That’s as far as the story goes at the moment, but I will update things when I get some photos of the workshop in its current state.