This has been a very busy week with the start of semester and everything. As you’ve probably guessed from the achievement, my keyboard quest has finally drawn to a close. After a long trek to the Springfield road, I walked away with a 1995 IBM Model M, made in the UK by Lexmark. It’s one of the more recent Model Ms, but still fairly old at 16! It wasn’t in the best condition when I got it as you can see in the pic, due to being in storage for a number of years.

I spent the morning cleaning the board up, and after a few hours work it’s now like new. The only thing missing are two key caps, a Ctrl and an Alt, though I’m going to order some replacements pretty soon. It really is a monster, weighing quite a bit and dominating my desk. And the best thing of all; it’s super clicky! It feels amazing to type on, and it really is the best keyboard I’ve ever used. Once you go mechanical, you never go back! This is probably going to be a picture heavy post, just so I can show it off some more.

Alongside the keyboard excitement, there was also a lot going on with the start of the university year. It was strange going back after four months of doing nothing, but it didn’t take too long to adjust. It looks as if it’s going to be a busy year already, but it should be good all the same. I also have a brilliant clinical attachment group, and a fantastic GP tutor so it promises to be both educational and fun, or put so succinctly by my physiology lecturer, “edutaining”.

I really do like shallow DoF, and you can see the thickness of the keyboard here

Before I forget to mention it again, I started playing Alan Wake a couple of weeks ago. I’ve been playing more games in the last few weeks than over the whole of summer, and trying to catch up all the games I missed before. Alan Wake is a unique game, with a unique way of presenting the story. You play Alan Wake, famous horror writer who has been suffering writer’s block recently, and is vacationing in the picturesque town of Bright Falls. But everything is not well. Your wife is kidnapped, and the kidnapper wants the script of a book you haven’t yet wrote, but you are living through. The story is narrated by Alan Wake, and unfolds with the plot of the book. There are some really cool elements, like finding pages of the book scattered around the maps and giving a hint of what you are up against next. From the pages I’ve read so far, he’s certainly no Stephen King. He writes pretty poorly, which makes me wonder how he could have become such a famous writer in the first place. Gun fights with enemies are also very different, and because they are essentially shadows, you first have to use the flashlight to illuminate them. Following that you can use a standard firearm: whether you have a revolver, hunting rifle or shotgun they all do the same job at this stage. There are also some other handy weapons, like the flare gun which can take out multiple enemies, flashbangs which do a similar job, or just flares which can keep multiple enemies away from you.

Alan Wake with his weapons of choice

So far the game seems pretty good, though I’m yet to complete it. It can be pretty challenging when you are trying to ward off multiple enemies while running out of both batteries for the torch and bullets for the revolver. Thankfully the game isn’t stingy with ammo for the most part, and there are usually places where you can stock up scattered about the landscapes. The graphics are pretty decent too, and the landscapes are really shown off. There is a degree of exploration allowed, but it’s very linear, though that isn’t a bad thing. There has way too much emphasis on open world or sandbox games in the last few years, but sometimes it’s nice to have a well told story you can play through without copious amounts of minigames to distract the player. As usual, I’ll keep you informed as I progress through the game. 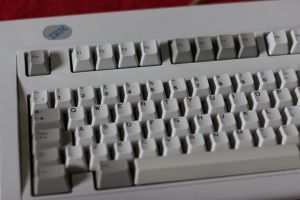 That wasn’t the only game playing recently. I’ve started Morrowind after being recommended it by a friend, though with everything else going on I only got playing for a short while. The third installment in the Elder Scrolls series, with the excellent Oblivion being the fourth, and the promising Skyrim being the fifith. From the start, the gameplay is very similar to Oblivion. It could be considered a primitive version, particularly with the walking mechanics of other characters which is quite entertaining to watch. Otherwise there isn’t much separating it from it’s sequel. The menu system on the PC version was quite frustrating to work initially, but after a while it wasn’t so bad. Where I find fault is the combat system. It makes no sense for a first person RPG to have a percentage hit system. Maybe if the combat was turn-based it would work, but in this game it just doesn’t work. Despite watching your weapon strike an enemy, there is a high chance that it won’t even hit them, if you are a low level. In Oblivion your weapon either physically strikes an enemy or it doesn’t, just like in real life. There isn’t a committee who watches an action replay and decides whether to award the strike or not. I sat jabbing a dagger into a worm thing for a good five minutes before it died, with only a few of the strikes actually counting. As I say, I can’t speak for the later levels as I have only started recently, but it really is a ridiculous system.

Just a screenshot from Morrowind

Aside from that major grievance, it plays pretty much the same as Oblivion, with the different guilds and main quest. Stealing isn’t as easy in Morrowind, because as soon as you pick up an item illegally, it doesn’t matter if the guard can’t see you, he knows automatically. I guess it isn’t too bad in a way, forcing the player to think before taking the easiest route to money. Walking between towns feels like an adventure on its own, with reasonably large distances between them, though there is a transport system, the Silt Strider allowing fast travel. Fast travel really is a blessing in Oblivion which saves a lot of time, and I don’t think most of your time in game should be spent walking between quest objectives. It isn’t the most fun thing to do. Hopefully I’ll get playing some more of the game tonight.

Another first was OnLive, the game streaming service which had it’s UK launch recently. It allows you to play games through the OnLive launcher, which are stored on servers (cloud gaming). The games can be purchased, or just rented for various lengths of time. As long as you have a decent internet connection, you can play games without having a top of the line PC or having to install the games. OnLive has also released a micro console, which lets you play through your tv too, using a bundled wireless controller. I thought I should give it a try, and chose a free trial of Warhammer 40K: Space Marine, a game I played at Gamescom a month or so back. The trial lasted for 30 minutes, and this time I tried the single player campaign.

The graphics did look good, but somewhat washed out. There didn’t seem to be any way to correct this in video options, but it was a minor annoyance and the resolution itself was fine. The campaign was pretty fun, and I didn’t have any major problems with lag or artifacting. Being able to jump straight into games without waiting for my own computer to load it was great. The campaign is fairly frantic, throwing lots of enemies against you in a relatively small area, providing some great melee fun. Most of the time enemies are so close you’ll be using the chainsword, which really tears through enemies and saves bolter ammo. The bolter was pretty damn powerful too, especially after using the pistol. The only enemies I got a chance to fight were Orks, and they could be pretty tough. The firefights were challenging enough even at medium, though if your health drops you can execute enemies to regain some. It feels like the emphasis is on melee fighting, allowing you to combine slashes with kicks to stun enemies, and finishers as I mentioned before. You can tear through big groups of enemies by using these combos, and it’s often easier than picking them off from a distance.

I could easily have played for much longer, if the trial hadn’t run out. At the end of the trial you have the option to rent the game, and resume your progress which seems like a pretty good idea. I’m definitely impressed by my first OnLive experience, but would I buy a full game? Preordering Batman: Arkham City gets you a free OnLive microconsole, but the games have a hefty price, similar to console games. The problem there is that you have no physical copy of the game, and they cannot be resold making them a pricey alternative. Hopefully the price of the games will come down, and if it does, then I think it could be a very viable alternative to buying a high end gaming PC to play the latest games on your computer. And being able to play on a television is a nice touch too.