I’ve had yet another hectic week, but the weekend is here again. And with it leaves the burden of my practical report, but next week I have another presentation and test! Such is the life of a medical student, but I could care less about that at the moment. For now, there’s a weekend of Skyrim and other games ahead.

The major event the week was filming the inaugural lecture in Shelter NI’s annual memorial lecture series along with Calum. Newforge Studios is back in business. Essentially it was a lecture on housing law/tenancy that my sister was involved in organising, as she works for Shelter NI. It was actually really interesting stuff, though I would have listened more closely if I wasn’t concentrating on watching sound levels and keeping the speaker in shot. There were a lot of big shots from different departments there, even from public health, so the evening was a great success. It was just a shame it fell on the same date as the public sector strike on Wednesday, which might have affected attendance slightly (though the event was organised before the strike was even announced). It shouldn’t have affected it too much though, as it wasn’t work related, and was more of an interesting evening lecture than anything else. Plus it’s Homeless Awareness week! The event was held in the Lagan Leagacy Barge, which was really interesting as well, if not a challenge at times. The soundtrack is going to be some of the speakers voice, and the rest will be creaks and groans of the swaying barge. I’ll see what I can piece together over the weekend anyway. (I just got looking at some footage, and it looks good but the creaking is definitely noticeable, more so than I thought on the night) 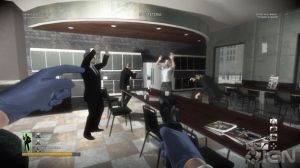 The week also brought a few new games into my hands, namely Payday – The Heist, and AaaaaAAaaaAAAaaAAAAaAAAAA!!! A Reckless Disregard for Gravity. I haven’t played much of Payday as of yet, but it seems like an enjoyable game. You play as a member of a team of bank robbers, and play objective based heists (or so I can surmise so far). In the first bank you have to go through all the steps to get to the vault, including collecting supplies left by the insider, managing hostages, drilling open security doors, using Thermite (yes, Thermite!) to burn through the floor into the vault and making away with the cash. Of course it’s never that simple, and as soon as you trigger the alarm the guards start to give you hassle. Bank guards are nothing though, and soon the police are called in, along with SWAT teams to sort things out. Killing people isn’t necessarily difficult here, but the civilians are also running round like headless chickens increasing the chances of casualties. Killing civilians is frowned upon, and increases your time in custody if caught as far as I’m aware. As I said, I’ve only played a few matches so far and haven’t even managed to finish one! It is tricky at times, but my computer being kinda slow at times doesn’t help. I’ll definitely try it on the PC upstairs to see how it looks on full settings, because the graphics definitely have potential. As soon as I get playing again I will write up more about it.

Now for AaaaaAAaaaAAAaaAAAAaAAAAA!!! A Reckless Disregard for Gravity. It’s really not like any other game I’ve played, and makes a refreshing change, as well as a challenging one. From what I can understand (which isn’t much to be honest) you play a base jumper in the future, jumping off insanely high structures and trying to accumulate as many points as possible. Points can be gained by falling close to buildings, smashing score plates, reacting to fans and protesters and spraying graffiti on buildings. It is a fun game and very addictive, and the difficulty escalates pretty quickly too. Alright, it isn’t the most amazing game ever but it is enjoyable and worth looking at if you get time. You just don’t get unique gameplay like this from big developers, and this is the case here too as it was made by indie developer Dejobaan Games.

The Skyrim saga continues, and I won’t bore you with all the details here but I did slay my second dragon and first giant. The giant battle wasn’t so much a face-off as a run-and-cast-and-run-and-cast battle, because the it could still one hit kill me. That and there was a huge mammoth chasing after me at the same time which was also trying to gore me. Aside from that, most of my time was spent wandering in the mountains and exploring ruins. Greatswords have become my weapons of choice for the time being. Who needs to block when you can charge in and cut someone down in one hit!

The semester has gone so quickly, and there are only two weeks left before Christmas holidays. I don’t know whether to be relieved or scared. Relieved that there’s a break from work for a while, or scared of the amount of work I still have to do to get up to date with everything. Studying around Christmas time doesn’t feel in keeping with the spirit of Christmas…I should instead be sitting by an open fire eating sausage rolls, drinking cider, watching Die Hard, playing one of the many deer hunter games, surrounded by family. Stop me before I get too Christmassy already, there’s still a while to go yet.

Battlestar Galactica season 2 is over, and I’m on to season 3 now. I know of few TV shows which have been as consistently excellent and with as many plot twists as Battlestar. And just when I think I’ve figured out what the hell the Cylons are up to, they do something completely different. I’m already tempted to go back and watch the mini-series over again, but then I’d get into an infinite Battlestar loop and never leave the house again. Seriously, if you haven’t seen it already hurry up and watch it. Even if you’re not all that into sci-fi, it’s still very well made with a strong plot.

That’s about it for now, and it’s almost dark…it’s only 4ish! Winter isn’t all fun and games, there’s cold and dark too.

PS Why does “death is only the beginning” crop up all the time?!