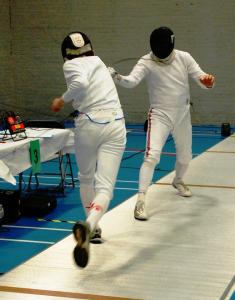 That's me, running at the other guy, and winning the point

Yes, I am now equipped to duel with my new rapier! It’s strange, but I always imagine swords as elegant, light weapons, whereas the reality is that they are heavy monsters. Even the rapier, one of the lightest swords, is hefty enough. I can’t imagine having to fence with it for any amount of time. The main reason I was interested in getting my hands on one was because it is the ancestor of the épée I fence with normally, though it has changed significantly in the process of becoming a sport weapon. My particular rapier is an English swept hilt type, and sharpened at the tip but not the sides, as it is primarily a thrusting weapon. As a training weapon, it would actually be pretty excellent. If you could get used to the weight of the real sword, holding an épée after an intense bout of fencing would never phase you again. On another fencing note, I’ve managed to find the only picture of me fencing in existence, as far as I’m aware. And it’s actually quite a good one at that. It was taken at the NI Open back in January, and I didn’t even realise anyone was taking photos, but it was posted on the Irish Fencing Federation’s facebook page which I just happened to be perusing for ranking information. I’m not aware at all of what I’m doing when I’m fencing, and by that I don’t mean that I can’t fence, but that I’m not aware of what I actually look like or what my posture or positioning is whilst I’m fencing, as you can tell from the photo on the left. Still, I’m quite happy I got the point – right to the neck! I only go for kill shots of course…but not really. The best target is the wrist/arm, left over from the time when you would duel to first blood, and a nick to the wrist was the quickest and cleanest way to beat your opponent.

I’m back fixing computers again as of this morning. It’s not the biggest issue in the world, just a failed power supply, but it’s lucky it didn’t take the whole computer down with it. PSUs have a tendency to destroy everything on the way out, as computer components are quite sensitive and don’t deal with power issues well. This computer really isn’t having the best of luck in general. It’s a failed power supply now, but way back in June, one of the RAM sticks became corrupted and manifested as a million other problems, covering up the real issue. I’ve also performed numerous reinstalls for viruses and other problems, but hopefully it’s on the straight and narrow now, as it seems to be working relatively well. Of course no computer project is without minor injury, and today’s incident came in the form of a finger stabbing by a motherboard header. In my defence, the design was destined for disaster (anybody liking the alliteration?), as the RAM clip needed a fair amount of force to undo, and my finger slipped and pushed right into one of the motherboard header pins. I love computers. But seriously, I’m still looking for business so if have any computers that need fixing give me a shout.

The induction hob is just getting better! I managed to make a stirfry for lunch today in it, and as soon as it was switched on, the oil was up to temperature. Insanity! I don’t know what has taken humanity so long to latch on to this fantastic technology, but people really should embrace it more. It’s much more efficient than older electric hobs, and doesn’t require a fuel source like gas. I feel like I’m on the shopping channel endorsing some ridiculous and pointless product (90% of their stuff), but I really can’t recommend it highly enough. Just don’t leave aluminium foil on there – it can heat up to melting point, which would undoubtably be spectacular, but at the same time a horrifically bad idea. 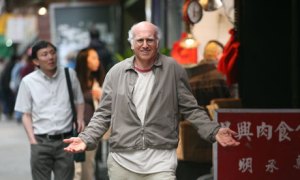 Larry David in 'Whatever Works'

One of my latest goals is to watch all of Woody Allen’s films, as his style is really quite interesting. He uses narration, breaks the 4th wall and the films have a very zany humour style. Whatever Works is one of his more recent films, and I watched it last night. Being perfectly honest it was because Larry David, Seinfeld writer and star of Curb Your Enthusiasm, plays the lead role – Boris Yellnikoff, a misanthropic physicist who spends his entire life ranting about humanity. The title, ‘Whatever Works’, represents Boris’ views on love, and the film really does play out that way with weird twists throughout. Overall, I thought it was a pretty good film, and even though the words are coming out of the mouth of a different actor, you really can see Woody Allen at work. Undoubtably Woody himself would have held the lead role if he was a few years younger.

Aside from that, I’m going to take it easy this weekend, as I haven’t been in the greatest form over the last couple of weeks. Mounting tiredness and other factors are conspiring against me actually getting work done, and I’m struggling to get motivated to do any filming whatsoever. The NICC annual competition is coming up in a couple of weeks, and I’d like to have an entry ready for it if possible.

I haven’t took any pictures with the new sword, but I’ll try and get them up here as soon as possible when I do.

Oh, and there’s a new iPad that’s called…well, the new iPad. Good name, though actually very good feature set, but I’m fed up of looking at the same products being rereleased year in, year out. What happened to innovation, and exploring new platforms and new technologies. As we are advancing further and further technologically, everything is becoming much of a muchness, which really frightens me. Yes, there’s something to be said for the Mac asthetic – clean lines, aluminium, glass – good materials and good workmanship, but what happened to the days of their products looking different? I love my iMac G3 Graphite Special Edition, and I should have it out on display all the time. because it is fantastic looking. Before the iMac, all was not well. Computers were beige, off-white, almost white, or even grey if you were lucky. Nobody seemed to understand that it didn’t have to be that way. Well, almost no-one. Jonathan Ive was the exception to that rule. After the iMac G3 came the iMac G4 and the eMac, which also looked pretty awesome. There was nothing even slightly similar to the G4 available. And when the G5 reared it’s head, all was well with the world, and everything was packed into one sleek screen. But then things stopped changing. Designs remained the same, stagnating. The Apple store became monotonous; a sea of glass and aluminium. I sincerely hope there are other people seeing what’s happening to our technological world, but that’s probably just my craziness coming through.