A game review?! Not really

There was no real post last weekend, just a general commentary on life and death. I did not feel inspired to write anything interesting or whimsical, it just didn’t seem appropriate in my mind at that time. Another new week though, and life goes on. Another good week of ENT in Altnagelvin, though things were off to a slow start on Monday, as surgery was cancelled following the crisis last Friday. Yes, there was another fire; the second in as many weeks. This time it was rather more significant, and started on the roof (don’t ask me how, it doesn’t sound like the typical place for a fire) and burst a water tank, which caused damage to a number of the floors. Most of what I have heard was through the grapevine, but allegedly the ceiling on ward 10 caved in and caused damage, though there could be a few other reasons the top few floors remain closed. The wards affected were just relocated to different parts of the hospital, and things are functioning again.

I did get into surgery on Wednesday, and Thursday, though the latter was only for a short time seeing a dental extraction, then getting politely kicked out because the placed was rather overcrowded. Wednesday is always an interesting list though, with a mixture of operations ranging from septoplasty and FESS to vent/grommet insertion and otoplasty. I should probably explain things a bit more, for the non-surgical/medical minded. Septoplasty is remodelling of the nasal septum to correct damage or deviations. FESS, or functional endoscopic sinus surgery, uses a fibre optic endoscope to visualise the nasal and post-nasal spaces, and from there surgery can be performed to do a number of things including removal of polyps, or to improve sinus drainage in people with chronic sinus problems.

I’m sure most of you have heard of glue ear, the common ear complaint in children presenting with a decrease in hearing and difficulty concentrating at school. It’s a very common condition, and 50-80% of children will have it before the age of 10. The technical term is otitis media with effusion (OME) and it involves Eustachian tube dysfunction (the tube equalizing pressure, between the middle ear and the throat), which leads to a negative middle ear pressure, sucking back the ear drum, and resulting in the build-up of fluid or mucous. This fluid dampens the vibration of the ossicles, or bones of the ear, and results in a reduction in hearing. The best treatment, as with many things in life, is to just watch and wait. 50% of cases resolve within 3 months, so nothing is usually done until that point. If it doesn’t get better on its own, then the ENT surgeon can go in and make an incision in the ear drum to let fluid out, and place a vent/grommet to keep the hole open and allow the pressure to equalise. Otoplasty, or pinnaplasty is commonly known as “pinning the ears back”, and is used to correct prominent ears (or “bat ears”, if you are so cruelly inclined). The ears stick out so much because a fold that is normally present (the antihelix) is missing, and so they take a different, more prominent shape. There are a few methods used to accomplish this, including weakening the cartilage to create a fold, or placing sutures and pulling the ear into place.

It is an early start though, as things kick off around 7.45 in the morning and it runs throughout the day, but it just adds to the excitement of it all. Most of ENT surgery is interesting, but a lot of it is very fiddly work, often with the aid of endoscope or microscope. As a result, it’s not always possible to see what is going on. Sometimes there is a monitor connected to show what the surgeon is seeing, but more often than not you are left in the dark. There are always helpful people around to explain what’s going on, but there’s nothing like seeing it first hand.

Enough medicine! I get enough of that during the week, and now it is seeping over into this. Back to the core of the blog. 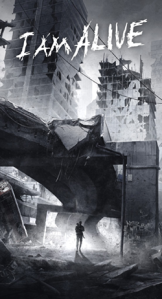 No wait, that’s not quite right. The true core of its being, embodied by the very title. Gaming! And I have actually been playing a few games recently, including Black Mesa which I mentioned previously. I’m chipping away at it, bit by bit, and still enjoying the campaign.  I’ve also delved into “I am Alive”, the survival horror (sort-of) game by Ubisoft, released earlier in the year for PSN and XBLA, and more recently released on PC. I can’t remember when I saw the trailer for this one, but I remember being captivated instantly. Post-apocalyptic genre games have always garnered my interest, perhaps because of the expansive desolate environments, or the compelling struggle for survival of the main character, and “I am Alive” was no different. The game story begins one year after “The Event”, which was essentially the apocalypse, and included severe earthquakes which destroyed most towns and cities. As with any disaster, the government stepped in to provide aid, but as with every disaster, the aid was woefully inadequate and many citizens felt abandoned, running low on supplies, and became bitter and violent. You play a guy who travels back to his home city in search of his family, and has to traverse the treacherous environment and natives to reach his goal. It’s pretty standard as far as post-apocalyptic storylines go.

Gameplay-wise there is a lot of climbing and platforming, and it feels like Assassins Creed set amongst Fallout 3 or Metro 2033. I’ll have more when I get further into the game – I’ve only just begun.

Phone project! Yes, I did manage to fix my phone after the touchscreen decided it no-longer had to work, but now I need another project. And what better project to add more functionality to my phone than a sliding keyboard. I’ve always liked the idea of sliding keyboard phones because a virtual keyboard never really cuts it for me, but they have fallen out of favour in the last few years, largely because of added bulk and cost. People just don’t seem interested in them these days, but hopefully that will change. In the mean-time, there is another solution available. For those of you with an iPhone, this is only a matter of buying a case with an inbuilt sliding QWERTY keyboard that connects to the phone via Bluetooth. It’s an Apple world unfortunately, and these products have only been made for iPhones, but that’s not going to stop me. It will take a few tweaks and modifications, yes, but hopefully the result will be worth it. Brace yourselves…this could be phone history in the making. Unfortunately I wasn’t alone; someone else thought of it first (https://sites.google.com/site/galaxykeyboard/), but at least I know it can be done without too much modification. It shall be done, and it shall become an Instructable. If anyone wants a plain case for an iPhone 4 (sans keyboard) I bought one and don’t need it now; it was just for testing.