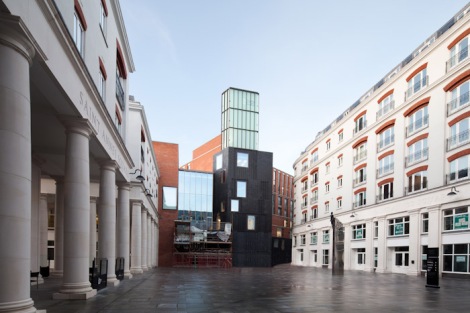 The MAC inside St Anne’s Square

Where to go next? That’s the real question. Cathedral Quarter seems like as good a bet as any, and St Anne’s square to have a look round the MAC. It’s a place I’m yet to visit, but I’ve heard good things. Cathedral Quarter is the place to go for anything artsy, or, cathedral-y. I stopped in front of St Anne’s briefly and came across a family of, seemingly, American tourists. The son was a dead giveaway, with a baseball cap and letterman jacket, but appearances can be deceiving. They were being perfectly American looking, and all of a sudden, started speaking French. I moved swiftly on and left them to their wandering. There is a certain peacefulness in this area missing from the rest of Belfast, making it a good place to stop and write some more. Most of today was been spent people watching; observing the great variety of tracksuits on the streets. I kid, of course, but only slightly. The population does seem to be diversifying slightly, but you do get the sense of the 98% white statistic coming through. We still have a long way to go compared to other parts of the United Kingdom, and the world in general. Our little island feels sheltered.

The Hunt for Lunch 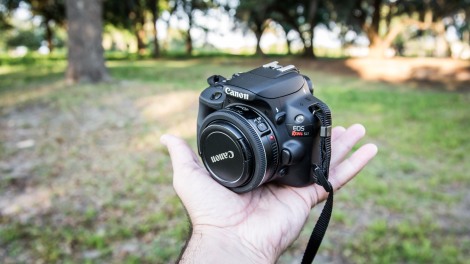 The hunt for a place to have lunch had just begun. As did the camera shopping. Curry’s has a pretty decent selection of DSLRs now to try, including the diminutive Canon 100D which is now the smallest APS-C sensor camera there is. I liked the feel of it, but it was a tad difficult to grip because of the size of it. The advantages are obvious when it comes to carrying a DSLR around – even the 550D can be a tad bulky at times, and with a lens like the new 40mm pancake, it  would be the perfect travelling companion. As far as build quality in the entry level goes, Nikon seemed to have the edge. Their cameras felt very good in the hand, and had a better surface texture. Canon’s cheaper cameras are a tad plasticky, And the cheapest Canon camera, the 1100D, just don’t even think about it. The picture quality is fine, I’m sure, but the button layout is shocking and it was just very off putting to use, and boxy. It’s worth saving up and opting for a better model like the Canon 100D or the 550/600/650/700D (they’re the same basic camera with some fancier features).

Back to lunch. Who knew there was a New York style deli in Belfast? Probably quite a few people, including my sister, but not me. I’ve been looking to try a sloppy joe ever since they were first mentioned in the Simpsons. Mikey’s Deli is on Bridge street beside the Northern Whig, and is worth a visit if you’re in the area. They have all the classics including hot dogs and corn dogs, sloppy joes, pancakes, and their own special dog bowls. Apparently the dog bowl challenge has never been completed – a massive bowl of fries, sloppy joe sauce, nachos and cheese, and frankfurters. The waiter told me someone had come close to finishing it, but they didn’t fare well after. The sloppy joe lives up to the title – it’s a burger bun filled with a meat sauce (similar to chilli) with cheese, and difficult to eat while maintaining your dignity. It was nice for a change, but there are a lot of good places in Belfast for food, including the Ginger Bistro, Rhubarb, the Mourne Seafood Bar, Boojum, and much more!