A break! It feels like it has been so long since I have had a proper holiday, one without anything to do, and this holiday is no different from others. There are many things to do and so little time to do them. And that isn’t including coursework. Essays, papers, presentations and more await me – tasks to which I do not look forward to. In the meantime, I’ve been assembling my workshop so that I have somewhere to work with rings and other projects. In a short time I’ve gone from cluttered garage to a prototype workshop (within an extremely cluttered garage). I’ve got a woodworking vice, an engineering vice, a drill press, a bench grinder, a bunch of awesome tools, and of course, a computer stashed away in a drawer under the bench. It’s nice being able to do whatever I want in the garage, because it doesn’t have to be aesthetically pleasing – it helps, but as long as it is functional, I’m happy. My granddad keeps adding tools to the collection, as he has an immense amount of them. He was a joiner and over the years has amassed every possible tool that is in any way related to woodworking. We were sorting through things today, and he unearthed some interesting objects including a giant screwdriver of titanic proportions (it may well have been used during the building of the titanic), an auger (a giant drill bit used for boring holes, which I first encountered in the Curse of Monkey Island…perhaps the fireflies need some air, or some other cryptic statement), and an ancient soldering iron. The main vice is currently in the middle of restoration, and is getting a few coats of Hammerite, but when it is back on the bench the workshop will be fully functional. 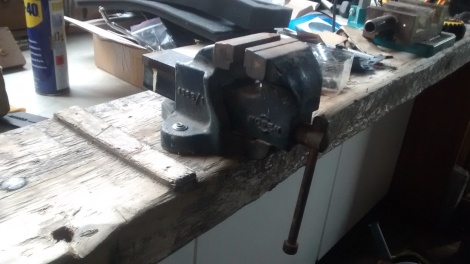 Miami Vice would have been a significantly different show with me at the helm. This is the smaller engineering vice which is mounted on top of the bench, instead of underneath.

Newforge Studios’ newest acquisition in the filmmaking arena is the Blackmagic Cinema Camera (BMCC), which is capable of shooting 2.5K RAW footage, and has 13 stops of dynamic range. For a camera with a mid-range price tag, these are some impressive feats. RAW is fantastic as far as colour grading is concerned, allowing a great deal of flexibility without comprising on quality, but the size of the files are truly staggering, coming in at 5 MB per frame. Another handy attribute is the ability to record directly onto solid state drives (SSDs), allowing higher capacities than regular flash memory cards. Though where RAW is concerned, the bigger the better – about 35 minutes can be stored on a 240 GB SSD. Madness, I tell you. For those of us with hard drives smaller than a data centre, the BMCC can also record 1080p footage using ProRes or DNxHD. 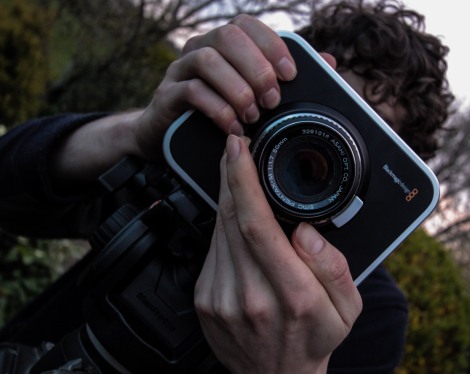 The beast…is alive. And wearing an old 50 mm f1.7 (one of my all time favourites). The Blackmagic Cinema Camera, at a slant for your satisfaction.

One of the biggest issues with this camera is the unwieldiness of the heavy, cuboid body, and lack of decent places to grip. This can be remedied with the aid of a tripod, or a cage with handles, but it makes for difficult handheld shooting out of the box. It is an interesting camera, and seems to be capable of impressive results in the right hands. We have the equipment, and the vision, so for any commercial, creative, or event video jobs, Newforge Studios is the place to contact. I mean, you could go to someone else, and everything might work out fine, but I’ve seen the competition first hand, and I wouldn’t hold out hope. This all sounds very “advertisey”, but it’s a commercial world, dammit, and I’ll be damned if we’re left behind. Dammit. Did I say damn enough? Just to be sure – damn blast, and a double dose of damn on top. In case you were wondering, we shoot with DSLRs, Blackmagic, and a number of Canon video cameras. Dedicated audio recording is also available. We also have a new Vimeo channel: check it out! That video has seals. Why aren’t you watching it yet? I’ll just assume you are watching it, since it has seals, and you can’t not watch seal pups and feel overwhelmed by cuteness. And you can’t not be compelled by my consecutive use of double negatives.