We ventured Into the Woods and saw the titular film last week, and those woods may just be the same woods from the Evil Dead. They’re every bit as disturbing as the woods in the Evil Dead. What initially appeared to be a children’s film quickly unravelled into something darker with more mature themes than expected. The film centres on a bunch of characters who, for various reasons, have to venture into the woods. Whether it is to sell the family cow in Jack’s case, or Little Red Riding Hood’s journey to visit her grandmother, the characters have a common destination. But strange things happen in the woods, and the paths of the different characters cross in strange and unusual ways. I enjoyed aspects of the film as it presented an interesting retelling of a number of the Brothers’ Grimm fairy tales. Elements from Jack and the Beanstalk, Little Red Riding Hood, Cinderella, and Rapunzel were woven together in a straightforward plot. Or so I thought until the final act when everything was turned on its head. To be perfectly honest, the final act put me to sleep. The film was unnecessarily long, and hard to recommend overall. Having said that, it would make an interesting film to analyse and explore all of the different themes and underlying meaning. I generally go to the cinema for enjoyment rather than an academic experience, though. 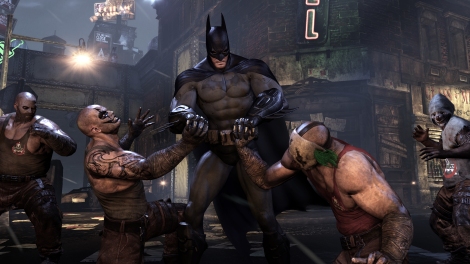 For the princely sum of five pounds and no pence, I acquired a copy of Batman: Arkham City, the 2011 sequel to Arkham Asylum. In Arkham City, the field of play has been expanded from the fairly constrained asylum to a portion of Gotham that has been walled off and used as a huge prison. Inmates are essentially left to their own devices, providing plenty of Bat-fodder. The game starts by putting you into the shoes of a Bruce Wayne who has been captured by Hugo Strange after holding an anti-Arkham City press conference in front of the entrance. I enjoyed the time spent playing as Bruce Wayne, even if it was a brief period before reassuming the mantle of Batman. The gameplay follows the formula laid down in Arkham Asylum using gadgets to great effect, and with the addition of a sandbox environment and plenty of side quests, Arkham City has a lot to offer. There are a tonne of villains too, with the prison being terrorised by the Joker, the Riddler, Two Face, and more. Even though it’s four years old it is still a great game and worth trying if you, like me, hadn’t managed to play it up until this point.