TL:DR I arrived in Nagoya on Sunday by the bullet train after a fantastic send off at Jikei, and I’m settling into a different pace of life at the molecular pathology lab.

I can’t believe it has been over a month since I arrived in Japan. The time has flown by, and just as I was settled in a new place, I moved again. I am based in the Aichi Cancer Centre with the molecular pathology division for two weeks. I arrived in Nagoya in style by Shinkansen – commonly known as the bullet train, and deservedly so. The Shinkansen is shaped more like a plane than a train, to improve aerodynamics, though the addition of train attendants dressed exactly like flight attendants seemed a little unnecessary. It wasn’t quite as comfortable as the train I took to Izu, but it was certainly faster. Ridiculously fast. Splendiferously fast. At certain points along the journey the track tilts, which is a rather odd experience and only gives a slight sense of derailment. I had my Nook and tablet for entertainment, but watching the world go by was interesting enough. I managed to sit on the wrong side of the train though, and missed seeing Mount Fuji. Given the compact nature of the train, there is less space for large luggage, particularly the size of my suitcase. I managed to squeeze it behind the back row of seats, but it proved to be somewhat awkward when I tried to disembark. A rather unhelpful man had taken the back seat before me so I couldn’t sit with my luggage, and when I tried to pull it out he kept his chair reclined. At this stage people were forcing their way onto the train past me, without a thought of helping me. I managed to drag it out eventually, and had to force myself past the surge of oncoming passengers. It was a rather undignified end to an otherwise pleasant journey. My advice for anyone thinking of taking the Shinkansen with luggage – get to the front of the line for unreserved cars, and if you can, reserve a seat for the back row so you can sit with your luggage and easily remove it when the time comes to get off.

The Shinkansen – it does look rather plane like inside

On Sunday night I took a stroll down through the “forest”. It was to be my last. Not my last stroll – the last time I walk on the pavement of a poorly lit, incredibly creepy street. It was only a little terrifying. Rather than the relaxing evening walk I had hoped for, I found myself hurrying along, able to run if I had to. Cars were sat at the side of the road. Headlights on, with drivers sitting and watching. The road took me past the zoo and botanical gardens, and the noises of caged animals weren’t doing anything to ease my mind. 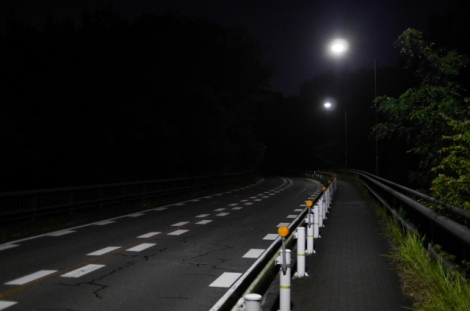 I eventually emerged at the other side and made it into the supermarket, Food Front. I have enough difficulty navigating Asian supermarkets at home with most of the labels in English, but in Japan, every supermarket is an Asian supermarket. Except it’s all in Japanese, making it even more confusing. Google Translate has been a useful ally, particularly the camera translate option where you take a photo of the text and it spits out a version in broken English. Sometimes it’s useful, sometimes not. It has helped me with a few things though. I paid for my groceries and brought them over to the bagging area. I didn’t have a huge amount, so one decent sized plastic bag would do, I thought. Why is there only a roll of small, thin plastic bags? And why does everyone else have their own bag? Apparently Food Front is taking a leaf out of Northern Ireland’s book and charging 2.5p for plastic bags. Outrageous! I don’t know if it’s common in Japan, but it was a bit a pain, and luckily one of the attendants spoke English and explained the situation. I managed to buy a bag off them and escape, but that was the last thing I expected. I have been given bags for everything here, from tiny to massive. If I bought a plastic bag they would probably bag it for me. Gifts normally come with two bags – one to carry it home in, and one to give it to the intended recipient in; why this supermarket would be cutting back on bags was a mystery to me.

I am at least a week behind with writing as usual, and many things have happened. My final day at Jikei was last Friday, and I was sad to leave. I really like the vascular surgery team and I had an immense amount of fun. On a slightly frustrating note, the last two operations didn’t really happen. The first was a traumatic arteriovenous in a patient’s foot, which was being investigated using angiography. So far it sounds fairly standard, but wait for the fun part. I was going to get to coil the fistula! I love coiling, and I had a few different opportunities to try, but this was my final chance to help out in vascular surgery. Things started out as normal, but it quickly became apparent that it wasn’t going to go as planned. Dr Kanaoka stopped to make a phone call, which is never a good sign, and the next thing I knew he had scrubbed out. The patient was being rescheduled for open surgery another time because it was an awkward case and the symptoms were not severe. Ah, great. Go out on a low, that’s what they always say, right? Then I was informed of a vascular access operation starting around four o’clock. It was cutting it fine for my farewell party and dinner at seven, but it couldn’t take that long, could it? It could. Everything started off fine, but then the patient started to complain of pain, as the operation was taking place under local anaesthetic. “Itai!”, she shouted. Something wasn’t right. The next thing we knew her arm had swollen up and a large haematoma, or collection of blood, was forming under the skin of her upper arm. The surgeons started to close the surgical incision, but the swelling had widened it significantly, making it difficult to bring the edges together. It had to be sutured several times before it would stay closed, and at that point, I was dispatched to go and enjoy myself at the dinner. The woman needed an emergency angiography to identify the bleeding point, then removal of the haematoma, which would take some time.

I headed out with half of the doctors and two other students to the restaurant, Shiba Tofuya Ukai. They serve kaiseki ryori, Japanese haute cuisine, specialising in tofu (hence the name). It was an absolutely stunning place, set just below Tokyo Tower, and with an extensive and ornate Japanese garden. I had never been anywhere like it in my life, and I would go back in a heartbeat. I’ll write more about the restaurant when I dig out the menu again. It deserves a post to itself. My first meal at a Michelin starred restaurant.

I wanted to go to karaoke at least once in Tokyo, and the doctors delivered. We grabbed taxis and headed to nearby Daimon, a popular area for karaoke. The night started off with a Freddie Mercury I wasn’t at all familiar with, then we had variety of songs in English and Japanese. Japanese people really do get into it, and nobody cares whether you can sing or not, as long as you have fun. It was great, and I managed to give my farewell speech. A few of the other doctors spoke as well, which was really nice. I was most touched by the speech from a doctor who I thought didn’t really like me, but he said “When in Rome, do as the Romans do” and explained the Japanese version, then said I embodied it. Apparently I integrate well into Japanese life and culture. Who knew! I had tried as much as possible to observe the customs and blend as far as I could, because here it’s all about fitting in, and going with things.

Before the night was over, I had a personal recitation of the Jikei school song, and a really bizarre send off. It was almost militaristic in nature, with a lot of shouting. I didn’t have a school song to share with them, but I did have a rugby anthem up my sleeve. Yes, I taught the Japanese doctors “Ireland’s Call”. I was struggling to think of anything, and it was the first thing that came to mind. Of course my taxi was paid for as usual. I was spoiled every day in Tokyo, by the doctors and my host family. I miss Tokyo already.

Nagoya has a lot to live up to. There is a different group dynamic here, as most researchers seem to work independently or in subgroups. There is no shared lunch time, and no chika soba.  I have learned a lot in the short time I have been here. I spent about five to six hours with the microtome slicing paraffin embedded samples for mounting to slides, and learned how to stain slides with haematoxylin and eosin. This is all the most basic pathology lab work, but I had absolutely no hands on experience of it so I am quite enjoying myself. Using the microtome is an art in itself. If you didn’t already realise, two microns is exquisitely thin, so trying to keep the section intact is trickier said than done.

The Avengers, hiding out in Nagoya

One response to “Farewell Tokyo and Hello Nagoya”