The workbench as it stood in April last year. It has gotten a lot busier since that picture.

I’m still working away at the other travel posts, but for now, we’re back to regular operations. I’ve started back to my final year of medicine gently, with an introduction week followed by a week off for self directed learning. This is far to early to be in the right mindset for studying! Consequently, the week was spent messing around in the Newforge Rings workshop and generally recuperating. I’m still adjusting to life outside of Asia, even though I was only there for a short time, and find myself bowing to everyone and being far too polite. It’s too cold here for politeness. I don’t know where the time goes, and I never manage to get as much done as I hope. I did play around with the second Raspberry Pi at Newforge, however. The first is still a print server and weather broadcaster, but the second was bought as a media centre for the garage. “But what about Drawputer?!” I hear you scream. I have sad news, unfortunately. After serving over a year as my trusty drawer-based computing solution, Drawputer, was retired last week in an attempt to free up space and modernise. I had the best of intentions to use it as a streaming media centre and YouTube viewer, but the sad truth was that the hardware wasn’t up to the standards of today. The machine was built around an AMD Athlon XP processor which was at least twelve years old, and had been in several computers during its working life. Back when we got that processor, AMD was king and Intel was being blown away by the Athlon XP line. Sadly, nothing lasts forever, and while Drawputer is more than capable of single-core tasks, multitasking and modern multimedia is not really possible. 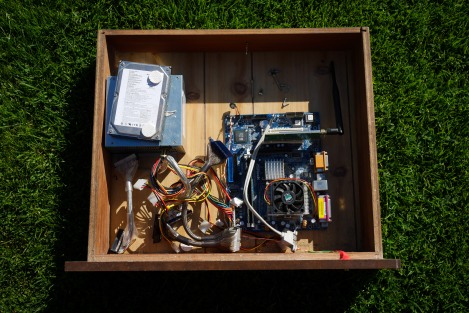 Drawputer, disassembled. A moving image, if ever I created one.

It wasn’t long before I installed my replacement for Drawputer. The new (er) Raspberry Pi, running OpenELEC, a media centre operating system (OS) utilising Kodi. Kodi is media centre software that started life as XBMC on the original Xbox, then moved to computers and the Raspberry Pi. The first iterations of XBMC were less than stable, and a pain to work with, but so far Kodi has worked like a charm. My garage computer use is mainly focused around streaming music and videos on YouTube, and a few other online video services, though a browser would be handy. As far as I can tell, there is no browser available for OpenELEC though there is for OSMC, a more full featured media centre OS. Thanks to HDMI Consumer Electronics Control (CEC), the TV remote can control the Raspberry Pi, and is used to navigate the media centre menus. I have a keyboard and mouse for backup, or searching specific terms, but I can get by with the remote alone. My TV has been upgraded somewhat from the tiny monitor to a 26″ Panasonic beast. Despite being an LCD TV, it manages to do a pretty good impression of a CRT when you pick it up. It takes up more space on the bench, but it was largely dead space that I didn’t use before, and the Raspberry Pi sits neatly behind it freeing up the computer drawer for tools and supplies.

The new configuration. Raspberry Pi with a Panasonic TV, hidden behind my drill press and bench grinder.

A Good Day for a Deathray

Organising the workshop took a fair while, but at least I could get back to making rings. Or not. For some mad reason, I decided I could no longer live with my old Toshiba rear projection TV. This was the real beast, at 40″ and about a tonne in weight. I wish I was joking, but alas not. Before it was sent off to the televisual afterlife, I consulted the internet to see if it could be repurposed, or if the parts could be salvaged. Among the interesting parts I found when I took off the front bezel were a front surface mirror (which is a mirror without glass at the front, to prevent ghosting of a projected image), and a big Fresnel lens. And what can you do with a big Fresnel lens? Build a deathray, of course! All you need is a Fresnel lens and some sunshine, and you’ll be setting things on fire in no time at all. I managed to burn cardboard, wood, melt a hole through a sheet of lead, and fried bacon with my deathray. An entirely practical invention. With the aid of a second lens for focusing, the effect can be even more profound. Concentrated light can be used to melt copper and other metals and is a force to be reckoned with. The TV also yielded some interesting projection lenses, and the CRTs which I am yet to find a use for. 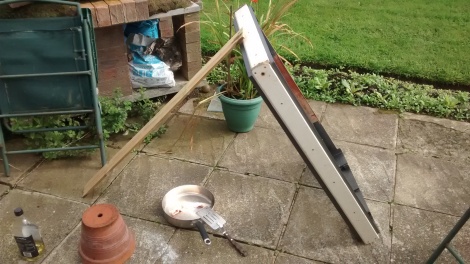 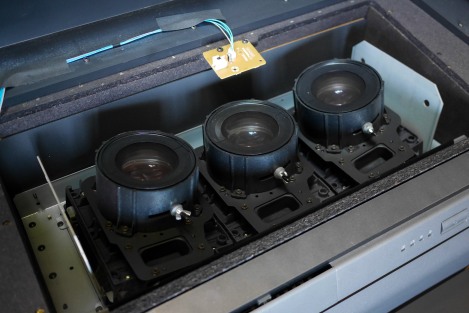 The lenses in situ, on top of the CRTs