The drinks menu at Sister Srey

Our first breakfast place was a random choice, settled on because it was cheap and served noodle soup. On the second morning, we did a little more research and picked the Sister Srey cafe, a little breakfast and lunch place only a few doors down from our hotel. 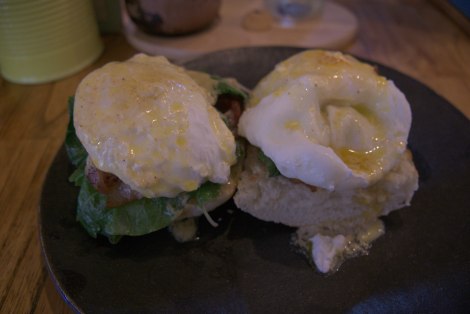 Sister Srey’s has a rustic, pop-up feel and very welcoming English-speaking staff. Prices are a little higher than other cafes in the old market vicinity, but the food quality and presentation more than makes up for it. The drinks menu is contained within a classic storybook, giving you the chance to read while you wait, and reminded me of Love and Death’s cocktail menu in Belfast. I ordered eggs-benelicious, a poached egg served on ciabatta bread topped with spinach and bacon, finished off with a drizzle of hollandaise sauce. Beautiful. The presentation was excellent, as were the flavours. It may have been one of the best breakfasts I’ve ever had. To drink, I ordered an iced chocolate, which was served in a jar with a bamboo straw, a little cookie on the side, and a conical flask of sugar syrup. It tasted remarkably like Nesquik, but was delicious cold regardless. Everything is sweetened with condensed milk or a variety of sugar here.

Steven’s luggage was due in at 1.30 pm at the Siem Reap international airport, so that was our next stop after making it back to the Shadow Angkor. A return journey by tuk tuk was $10, and all Steven had to do was go to the lost property office and pickup his rucksack. The relief in his face was palpable as he triumphantly exited the airport with his luggage alive and well. Even though it was just a trip to the aiport, I enjoyed the journey – there are so many different interesting things going on around you compared to home. In a typical journey, you might pass someone cycling a food cart, a motorbike carrying a stack of huge bags of rice, countless food and fuel stalls at the roadside, huge hotels, out of place Samsung and Panasonic service centres between makeshift shops, tailors, markets, massage parlours, and miles of rice paddies. 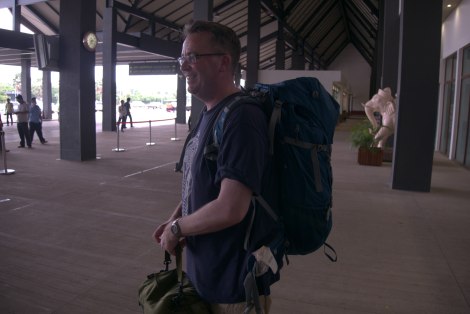 The luggage reunion – a touching moment

Getting the bag back was too much excitement for one day, so we crashed back at the hotel and did some research into Cambodian BBQ places. Early in the day, our path had brought us past a few Khmer BBQ joints just off Pub Street, but the big one had mixed reviews on TripAdvisor with less than fresh sea food. Our search turned up Hansa BBQ as a potential winner, but first, I wanted to try food in a Cambodian stret food blog. To the beef skewer district! Across the river, just around the corner from the Night Arts and Crafts Market was a row of little restaurants with charcoal grills out front. A variety of skewered meat was on display, including beef, liver, and some unidentifiable options. Following a map from the blog post, we came to the place at the end of the block and stopped. Just opposite was a nice, modern looking, Western-friendly establishment with indoor seating and aircon, beckoning for us to come on in. No! We had come this far, we had to have at least one authentic eating experience with the locals. Turning back to the beef skewer place, we tried communicating with the staff and were signalled towards a table. Anything could happen from this point on. They took our drinks order, but didn’t ask if we wanted any food. Then food started appearing. Plates of skewered beef, papaya/mango salad, and slices of baguette were set down in front of us. The bread was sliced and probably brushed with palm sugar before being toasted on the BBQ. The beef was coated with palm sugar, and possibly soy sauce. It was all delicious. The gamble had paid off. We each had a plate of five beef skewers with baguette slices, salad, and a beer, and the grand total was $5.50. One of, if not the best value meals I had ever had. There was no worry over food hygiene as the food was prepared fresh and cooked in view of the tables. One old woman sat at the grill turning the skewers, removing cooked ones and adding more fresh. Remember this food success story, as it will help to mitigate the later food…experience.

The skewers turned out to be a bigger meal than we had expected, so a walk was in order before the main meal of the day. Our days seemed to revolve more and more around food as the holiday progressed, as we were left looking for things to do in between meals. On that note, we were off to the Foreign Correspondents Club. I visited the FCC last year when I was in Phnom Penh, the country’s capital city, and had an enjoyable meal and cocktail overlooking the river. The FCC in Siem Reap is an altogether more high class affair, set back from the roadside in a white, colonial-style building. Cocktails were two for one, so we settled in and ordered our drinks. A daiquiri for my first, and an FCC Transfusion for the second. It seemed fitting. Steven ordered the FCC Rainfall, or as it should have been called, the Toilet Duck. It tasted uncannily like the smell of toilet cleaner, which is not an appealing trait in cocktails. His second choice didn’t fare much better. An innocent-looking orange drink appeared, but appearances were entirely deceptive. Made with chilli and Kampot pepper infused vodka, the Frontline was a firey inferno, to an almost undrinkable level. My transfusion was an altogether more mild affair – drinkable, not poisonously hot.
The walk to the FCC was down a picturesque tree lined street, with a higher proportion of decent quality pavement than the rest of Siem Reap.

Toilet Duck…I mean the FCC Rainfalls, is the blue abomination

There were a number of high class restaurants and hotels in this area, and it had a more upmarket feel. The prices were correspondingly higher, but still reasonable by UK standards. We crossed over the river again, and set out to find Hansa’s BBQ, our restaurant for the night. We had considered eating in Pub Street, but it seemed like a steep price and we didn’t know what we were in for. Cambodian BBQ involves a gas camp cooker placed in the middle of the table, with a metal dish on top. The dish is shaped a little bit like a sombrero, with a central portion for cooking pieces of meat, and a moat around the edge for soup.

We arrived at Hansa, took a seat, and were suddenly out of our depth. The waitress spoke very little English, and we spoke no Khmer at all. First she produced a kettle filled with stock, and poured some into the moat of the cooking dish. Then she gestured for us to go and get our own food, and we turned around to see a number of tables laid out at the side with a variety of sauces, raw meat, cooked meat, noodles, vegetables, and spring rolls. I had no idea what most of the things were, but I was determined to do this so I started grabbing plates and bowls. I ladled out some of the yellow and red sauce, dished up a plate of raw pork, beef, and chicken, and grabbed some vegetables. That seemed about right. I sat down opposite Steven, and saw the look of simultaneous terror and loathing. I had led us into unknown waters, with no real plan. It was chaos.

I had never experienced Khmer BBQ and thought it would be straightforward, and it mostly was, but many of the flavours were not that appealing. And having all of the raw meat sitting out on the side open to the air was far from ideal. I tried to avoid mixing cooked and raw food, keeping separate sets of chopsticks, but the rest of the Khmer patrons didn’t seem that bothered. I ended up eating a reasonable amount of beef and chicken, frying it on the dome of the cooking dish, and had a bowl of the soup. It was nice enough, but I think I ruined the soup by adding too much of the red and yellow gloop. The meat would have been nicer marinated, like the beef skewers, but at the very least it was an experience. And though the food hygiene aspect was a tad worrying, we all survived to tell the tale. Next time I’ll stick to beef skewers.

To finish the night, we went out to Miss Wong’s cocktail bar in the Lane, near the Old Market. I had a mocha martini, a proper dessert drink, and a Singapore sling. A great way to finish off a day of trying to blend in and eat like a local. Turns out Khmer BBQ mightn’t be as great as Korean BBQ, though it’s a damn sight cheaper.