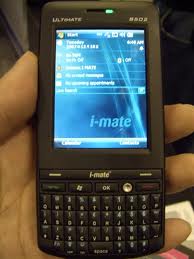 The long awaited (for me, anyway) phone call from Argos came today, with a vague message simply stating that my phone has arrived in store. Whether it has been repaired, replaced, or simply returned (sorry, I meant allegedly “replaced”), I do not yet know. It’ll be good to get my phone back, but at the same time I was getting used to my old phone again. Ahh, the good old i-Mate Ultimate 8502 (as seen in ‘The Case’). It was a really good phone, and after remaining broken for months following a run in with some river water, it spontaneously came back to life in my hour of need. It is pretty well specced – GPS, WiFi, a decent processor, and a resistive touchscreen too. The only reason I changed was because of the lack of development for Windows Mobile 6.1 (it was more of a professional OS), and the availability of apps on other platforms. That being said, there are few phones able to play Pocket Fallout! Sure it was buggy and didn’t really go anywhere, and also mostly Russian, but awesome all the same.

It was the third Windows Mobile phone I had, and by far the best. It didn’t have the high resolution screen or communicator style of the Toshiba G910, or the compactness of the BenQ E72, but it was by far the quickest and overall most capable phone I had up until that point. It’s built like a tank too, and the QWERTY keyboard made texting and emailing effortless. If I didn’t own the Orange SF, I would happily go back to the i-Mate any day. But alas, I must move on with the times. Android is the fastest growing mobile platform, and is where the smart money is at the moment. Why is Android so important? I believe it’s because it’s an open source platform, and the flexibility that comes with it is immense. Being able to customise pretty much every aspect of the OS makes it my outright favourite, and I’ll hopefully have many more years of it before my phone gives out (fingers crossed anyway – it has spent nearly as much time being fixed as I have used it).

That was just a quick weekend update, but I’ll be back with more next week!