A lot has happened in the few short days since my last post. I mean a lot. It’s hard to think of even where to begin. No photos again, as you’ll notice, thanks once more to the limitations of my phone/lapdock combo. The only good thing about it at the moment is that it’s keeping me off the computer as much as possible, unless it is completely necessary. Hopefully Alan will get some photos up, if there are any good ones. I also have use of a Canon EF 70-200mm f2.8 lens, which is really good, but limited in most of the situations I’m trying to take photos. Be ready for a lot of close-ups and EXTREME close-ups.

Portland is a really nice city, and we’ve been there a couple of times so far. The first time round it was lunch time, and we had our choice of food from many of Portland’s famous food carts. There was everything – Thai, Mexican, Chinese, American, Far Eastern, and lots of others. Nong’s Khao Man Gai was the cart of choice, however, as my prior research led me to it. It was fairly simple food, but good at the same time – poached chicken, rice cooked in chicken stock, ginger sauce and a bland soup (yes, they do describe it as bland, so don’t get too excited). Onwards and Northwards, towards Powell’s City of Books, by far the biggest bookstore I’ve ever set foot in. The mammoth store covers a whole city block and caters for every genre possible, though we barely made it out of the sci-fi and fantasy section,  and the cafe of course. What I really liked about it was that despite being a big store, it stocked used books as well as new so you can flick through various editions of titles and see how they have changed with time. I saw a copy of Jurassic Park with the “soon to be a major motion picture” label on the cover!

There has been that much going on I have forgotten when everything happened! Yesterday we were helping the Green Clean Queen’s team (Joanna, wife of my brother, runs GCQ) clean a house fairly nearby, and it isn’t until you start cleaning as part of a job that you realise the amount that has to be done. I spent the whole time working in a bedroom, but even the work involved in something as small as cleaning out tracks for sliding windows turns out to be much more than first anticipated. They are magnets for mould and dead insects, and just crap in general. It’s super hard work, and I can appreciate the amount of work Joanna does all the time. After that we took a trip to the Lloyd Centre mall in Portland, which is pretty huge. I find malls become rather repetitive though, and once you’ve seen one, you’ve seen pretty much all of them. Even the food courts are the same. We settled on Japanese after wandering around for a good while, which ended up being okay, but not great. Pretty much the template for mall food. Meh. 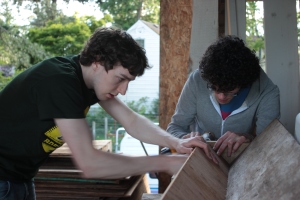 Building a trough for the pigs

Alan and I have been tending animals, building stuff, and generally helping out With everything which has been very interesting. We helped build Keith a pig trough, and a place to roost for the chickens. This evening we were putting together panels for a turkey run in the backyard, and the morning was spent clearing brambles from the land most of the animals are kept on. Farming, even on a micro scale, is still a lot of work. There was also a bit of time to go cycling today, and we explored downtown Oregon City a bit more, and got to ride in the Municipal elevator, which is an outdoor elevator connecting two neighourhoods. It’s quite unique, as it is the only one of it’s kind in the USA, and one of four in the world. And you can take bikes up in it, avoiding a horrible hill climb (of which there are enough of already). The weather is improving, so hopefully it will be good for the beach tomorrow.

I almost forgot to mention my new claim to fame. My instructable I put together last summer when I was pretty bored, to make a Rolo Donut Milkshake, was featured on the homepage yesterday. An editor actually picked it out of the many others to be on the front page! It was a very exciting moment, and I was rewarded with a PRO membership. When I find out exactly what that means, I’ll get back to you…

UPDATE : I’ve put up some photos in the post at last!

One pig enjoying the trough

2 responses to “What’s happening in OC (Oregon City, that is)”