Or perhaps it should be called “My week on” because I ended up doing so much stuff. Yes, it was my wonderful self-directed learning week, rather cruelly and dastardly placed the week before my last week of class, forcing me to fully abandon work for Christmas preparations only to have to pick things up a week later. I did have some fun at the Sci-Fi and Fencing Christmas dinners though, in Maddison’s and the Northern Whig respectively. And against all the odds I did get a chance to do a tiny bit of work in the form of watching endless pathology lectures. Damn you DVD! Damn you to hell!

The Hobbit –HFR/3D – 48 FPS is a big jump from 24, and I didn’t think I would be able to adjust. I’m ever in fear of the ‘soap opera effect’ on new TVs, where extra frames are created and higher refresh rates used to create smoother action and movement, without losing so much to motion blur like traditional sets. To be perfectly honest, motion blur has never bothered me significantly, and I didn’t think it was the number one problem that needed tacking in TV sets, but the manufacturers seem to believe otherwise. Luckily for the Hobbit, you do get used to it eventually. It is strangely surreal; the combination of the higher frame rate along with an amazingly high resolution, and the ever present 3D effect. It is almost as if you are sitting in a theatre, watching the cast members enact a play in an amazing setting. 3D is always a contentious subject, but I’m glad to say that it did not overly intrude on the film, and helped to enhance the wide vistas and frantic chase scenes. After a few hours I did start to get a little eye strain and headache, but that went away after closing my eyes for a brief moment.

It’s definitely an action packed movie, and it felt more light-hearted than the other instalments in the franchise. No doubt they are aiming to capture a wider audience with this film, as the violence has been tamed somewhat, with the removal of practically all blood. I’ve never fully understood how that works – you’re allowed to decapitate someone, but heaven help you if a drop of blood falls out. That would be terrible. Maybe in that time in that universe people didn’t have blood…who knows. If you make the decision to go the whole way of limb amputation (by sword) and decapitation then I think a bit of blood is warranted, just to be anatomically sound at least. 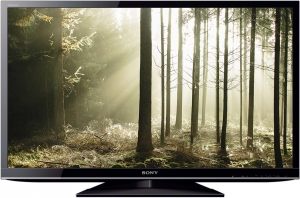 The film is an epic, running to almost three hours, and it does feel long, but it doesn’t drag noticeably. I don’t believe there was a time when I thought “this has gone on long enough, just put an end to it”. Martin Freeman really fitted the role of Bilbo, and seemed to settle into the character more as the story progressed, particularly in his scene with Gollum. It was nice the see Bilbo and Frodo at the beginning, like the start of the Fellowship of the Ring, as Bilbo was recalling his past adventures. It’s definitely worth going to see at least once, and if you are up for it, give HFR 3D a chance. It’s not at all traditional, and may throw you at the start, but it is pretty unique from any other film. Plus it generally looks fantastic – probably the highest resolution film/video I’ve ever seen before.

The TV is here! We went to pick it up in Antrim yesterday, and it is happily settled in our living room now, replacing the old Toshiba 21” CRT which did a good job as our main TV for the last few years. It’s a Sony Bravia 42” LED backlit LCD, and as far as features go it is fairly basic. It doesn’t have Smart TV, and you can’t record to USB, but it does have Freeview HD which is a nice added extra. The Freeview HD quality is excellent, but it really shows how much regular broadcast TV has aged. Even the electronic programme guide on our Freeview PVR which looked fine on the old set now looks as though someone has stretched it over their knee. Or it was designed for toddlers to operate. Whichever analogy works for you.

Much of my time this weekend has been spent shouting at another new edition: the Raspberry Pi. The Pi is a low power, low cost mini-computer and is a versatile beast. It runs Linux quite well, though not amazingly thanks to the spec, but the big attraction is its ability to handle 1080p HD video without any complaints. My last system was dated though decently powerful and able to handle most tasks and normal video, but it could never stomach even 720p video. Modern components seem to be much more geared towards it and as a result pretty much all video plays flawlessly. The difficulties I’ve been having are just teething issues hopefully, and I’ll have more about it once it’s up and running well.

2 responses to “My week off”