I sit here with my family, in front of a roaring fire, in quiet contemplation, and enjoying having a night off from hosting guests. Since the eve of Christmas eve, we have had people over visiting, which entailed non-stop cooking, cleaning and entertaining. It is always nice to see everyone, but there comes a time when you just want to sit down and do nothing. No intensive cooking. No intensive cleaning. Just sitting down with a beer, or a cup of tea, and truly relaxing with a good book or movie. For me, on my birthday, nothing beats watching Inception on Blu-ray and playing Metal Gear Solid 4. It is the little things that make life truly great; even something as simple as your favourite dessert (sticky toffee pudding, for me) can make the day. 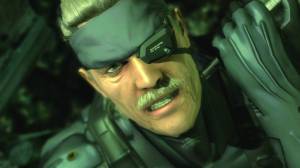 Speaking of Metal Gear, I’ve had a chance to spend some time playing MGS4 and so far I am really enjoying it. It turns out I am horribly out of practice, but it is still a lot of fun. The game is incredibly cinematic, and though people complain of endless cutscenes and codec conversations, I’ve found it much better than the second game in this respect. To be fair to Kojima, the storyline is so ridiculously convoluted and insane that the cutscenes are necessary to explain things. The gameplay is great as usual, with a lot of emphasis on stealth and the use camouflage and your environment. Snake has an OctoCamo suit which changes to match the surrounding building materials or nature in an attempt to blend in and conceal his presence. I should mention that things have moved on, and Snake has aged a lot. A hell of a lot. He is experiencing accelerating ageing, which has left him with the body of a much older man, and the limitations that come with it. As he becomes more stressed, aiming becomes more difficult and Snake begins to get backache and various other aches and pains. The exact reason for his ageing is unknown, and becomes much more obvious when he is seen next to characters from the earlier MGS games including Meryl, who hasn’t aged significantly from their last encounter.

From the very beginning you are thrown into a warzone, and left to navigate the urban battlefield whilst avoiding confrontation if possible. Neither side is your enemy, so there is no point in getting involved in the fighting. The graphics are great, and everything looks as it should. The huge variety of weapons is also refreshing, and the in-game store gives you a chance to cache in the points obtained from selling enemy firearms when you find them. Some weapons are also highly customisable, though ideally you shouldn’t be using any weapons at all, or at least just non-lethal options. With some practice you can fly through areas by moving stealthily, and guns only become a necessity in areas where you have to eliminate all enemies to proceed.

I’m still in the early stages of the game, but it is everything I had hoped it would be. It only took me four years to get round to playing it, but I had a good reason. I really had no reason to own a PS3 prior to the purchase of the new TV; and the main appeal this time was the Blu-ray player and media functions, with gaming being an added bonus. It wouldn’t be the first time I’ve bought a console just to play a Metal Gear Solid game…the first was buying the PS2 slim just to play Metal Gear Solid 3. I’m not a fan of the new styling of the PS3’s newest incarnation, the super slim, because of the combination of high gloss black plastic and weird ridged matt black plastic, and sliding disc cover. They have managed to get the console down to a very manageable size, but why oh why did they have to use that crappy slatted plastic?! It doesn’t feel like a premium console; it just feels cheap overall. The sliding disc cover also makes it kinda difficult to place the console in any TV stands/stacks. Who really cares though, and as long as it does the job, I’m happy with it.

That’s as much as I’m writing tonight. I’m just not back into my flow as of yet, but I’ll put that down to all the food and alcohol. I should be back in form in the next week or so, and hopefully something exciting will be happening. More than likely not though.

One response to “Huh…Metal Gear?!”