This is an amazing city. I had my first vending machine experience at the airport – a beverage not entirely unlike fizzy grapefruit juice – and I see them absolutely everywhere. Nothing too odd so far, just drinks and cigarettes. I took the Limousine bus to the Grand Hyatt Hotel, and walked from there, much to the surprise of the luggage attendant. It was only a fifteen minute walk. So many overwhelming sights, sounds, smells – this city is so vibrant and alive. Katsu’s apartment is very compact and very Japanese. Walking into the bathroom I had flashbacks to the airplane toilet. It wasn’t helped by my head still spinning from the flight. 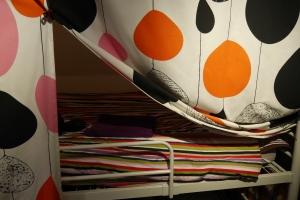 My bedroom/half a bunk bed

After a break and skyping home, I walked to Tokyo tower and ended up assisting a few couples with photos. I lost an hour or so of my life in Don Quixote, otherwise known as “Donki”, a multistory discount store with everything from food and cameras to probable knock-off designer clothing and sex toys. I ended up buying whatever looked palatable/breakfast food from a convenience store called Lawson – salad and French toast (I think), and finally made it to bed. 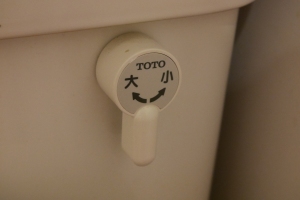 What do you want from me!!!! I don’t understand your language

After barely sleeping last night thanks to airplane-gut syndrome and the heat and humidity, I got up and felt like jumping out the window. It took me a while to get moving, and when I did I could get started into my breakfast. My salad and packet French toast breakfast. It wasn’t that bad, and the French toast/cake thing was quite nice. The Japanese don’t seem to have the same commitment to breakfast as we have at home.

I didn’t leave the house until my host, Katsu, arrived back. We had planned to go out for lunch as he was coming off a nightshift, but one of his friends was DJing at an all you can eat and drink music party/BBQ. I don’t usually drink and listen to loud music on a Sunday afternoon, but when in Rome, do as the Romans do. I got to meet some cool Japanese people, and rather too many Brits and Americans. Nearly every native English speaker here is an English teacher. Some of them speak Japanese well, and others can say a handful of words. You can get by here knowing very little Japanese. We stayed at the party until the set Katsu’s friend was playing, then left to go back to his place. Then I had a change of heart, and instead of going back to Roppongi where I’m staying, I got off at Shinjuku station.

Katsu (my host, on the right) and his friend

Shinjuku has quite a few electronics shops, and at least two big camera shops that I knew of: Bic Camera and Yodobashi. But I never reached the exit. I was almost at the exit then a group of three Japanese women stopped and started pointing at me and trying to get my attention. I was so close to walking off, but everyone has been so nice and helpful so far that I couldn’t brush them aside. The natural assumption was that they wanted a photo with the tall white guy sticking out like a sore thumb – this city isn’t built for me, but more on that later – but what they wanted was altogether more confusing and frightening. They pulled out a map of Europe and started asking me about where I was from. It quickly transpire that they wanted me to go to their church, for what I gathered from broken English (and zero Japanese skills on my part) was some kind of service or blessing. I tried to decline the offer, but they were so insistent and had already pulled me along and handed me a ticket for the subway so I wasn’t out of pocket. All along the way I was guided and watched, presumably to make sure I didn’t escape and spread the news of my kidnapping. I kid, they were actually very friendly, but it was hard to know at first if this was an elaborate mugging or a group of true religious folk who just wanted to save a soul.

We travelled the two stops on the JR train line and got out for the short walk to the church. The surrounding area looked really interesting, and I was tempted to walk off, but there were religious experiences to be had! I was committed now, and I was going to see this through to the end. The church was a nice but plain affair, without the grandeur of many older denominations. Upon entering, I had to remove my sandals and put on a pair of theirs for inside the church. Of course, the sandals I was given were tiny and my feet refused to fit into them. I was instead allowed to go barefoot, into a room with a number of tables and partitions. Ushered to a seat, I was sat down and offered a glass of Japanese summer tea. I was parched beyond belief, so it came at an ideal time. The minister sat down at the table with us, and she almost talked me through the process. I still had barely an inkling of what I was here for, but things were starting to make a little more sense. She mentioned being submerged into the water and that’s when it hit me. I wasn’t there for a blessing, I was being baptised and accepted into the church! The day had taken a strange turn, but I was definitely intrigued. I had never witnessed an adult baptism before, and now I was going to be the one taking part. I almost forgot, I had to speak in tongues during a prayer. 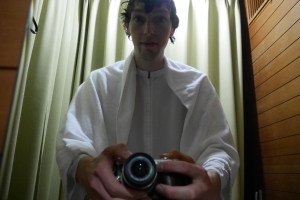 A young, smartly dressed met me at the door, and he had somehow found a pair of slippers that fitted me. I don’t know whether they rushed out and bought some, or they were brought into existence by a miracle, but they fitted better than most I own. The man gave off an air of quiet friendliness and professionalism, reminiscent of Cinnamon in the Wind Up Bird Chronicle. He led me to a set of changing rooms at the back of the building, and handed me the white baptism gear I had to wear. Including underwear. At this point I had to leave my camera behind and I didn’t get any shots of the baptism itself (my camera is not waterproof), but I can recall it with vivid detail. The young man led me back to the front of the church where the baptism pool and my new Japanese friends were waiting. Seeing them brought back how weird this experience really was. The minister was friendly and helpful throughout, and walked me through everything. I took off my slippers and got into the pool where she was waiting, and kneeled down, preparing myself to be drowned briefly. She said a few words in preparation for the baptism, then held me under for a second. Then I resurfaced, cleansed of sin (apparently). Then I was put under a second time, as my granda’s sister is very unwell, and their church practices baptism of the deceased, or something along those lines. After that I got changed and it was back into the church for some hot tea and a slice of cake. And Japanese hymn singing, and more bible readings. I was given some passages to read as well, bringing me back to being head boy in the rather Christian Lurgan College. A bigger map appeared and I was made to point out where I live in Northern Ireland, and all rejoiced at mine being the first Northern Irish soul saved in their church. It’s definitely a CV maker.

Aside from that it was a normal day, with a normal dinner in a normal vending machine restaurant.

3 responses to “Tokyo…how did it take me this long to get here?”