Litvinenko and a Terrible Cup of Tea

The assassination of Alexander Litvinenko was huge news back in 2006, and guess what, it’s back in the headlines again! A UK public inquiry into the former Russian spy’s death revealed what we expected – that he was probably killed on the orders of the one and only Vladimir Putin. Litvinenko’s last words were fairly damning.

“You may succeed in silencing one man but the howl of protest from around the world, Mr Putin, will reverberate in your ears for the rest of your life.”

The murder weapon? Poison. Specifically, polonium-210, a radioactive element that definitely shouldn’t be in tea. I know what you’re thinking, and yes, I too have tried Tesco Value tea, but even that doesn’t come close. Litvinenko had met with two Russians, Andrei Lugovoi and Dmitry Kovtun, who slipped the odourless and colourless substance into his pot of tea in a London hotel. Three weeks later he died in agony. 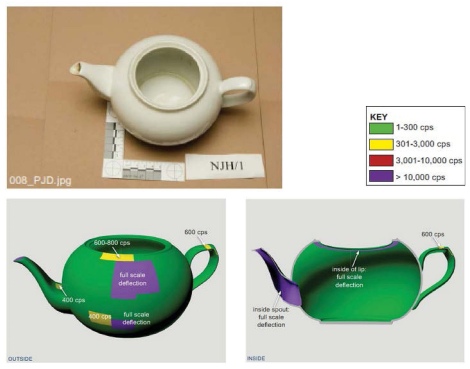 An analysis of the guilty teapot, showing the areas where radioactive polonium was detected. Photo issued by the Litvinenko inquiry

Polonium (2-tea-en?) gives off alpha particles, consisting of two protons and two neutrons. They have a range of only a few centimeters in air, and can be stopped by paper or human skin. If they can be fended off with a flimsy piece of tissue paper, why do we care about them? Alpha particles are a form of ionising radiation, along with beta particles and gamma rays. Ionising radiation can directly damage the cells and the genetic material, DNA, within cells. Damaging DNA can lead to mutations forming, and ultimately cancerous tumours.

So we don’t really care about alpha particles outside the body, as they can be stopped by the outer layers of our skin, but inside the body is a different story. If alpha particles are inhaled or ingested (or enjoyed in a cup of tea), they can cause widespread damage and radiation sickness or poisoning. Symptoms of acute radiation poisoning include hair loss, nausea and vomiting, bleeding, and diarrhoea, not to mention death.

Litvinenko in his final days, having lost his hair from radiation poisoning

We didn’t blame polonium straight away. Initial tests suggested a radioactive form of thallium, a substance used as rat poison until the 1970s, could be to blame. This is where my interest in the story began. My chemistry teacher named thallium the first (and only, if I’m correct) element of the week! Further tests revealed significant amounts of polonium-210 in Litvinenko’s body. Investigators didn’t detect the polonium earlier for the reasons I mentioned earlier in the post – the short range of the alpha particles mean that the radiation doesn’t escape the body and cannot be picked up by regular detectors.

This isn’t the first time a critic of the Soviet/Russian regime has been murdered in the heart of the English capital in a high profile assassination. That title goes to Georgi Markov, a Bulgarian writer who defected to England and joined the BBC World Service in 1972. He focused on criticising the Bulgarian regime and the Party leader, Todor Zhivkov. As you’d expect this didn’t go down well with the Bulgarian government of the time. The Bulgarian Secret Services (the Darzhavna Sigurnost) had sought advice from the Soviet KGB about the best way to neutralise Markov, and had already made two attempts on his life. The date of the third and final attempt, the 7th of September, was Zhikov’s birthday and may have been chosen as a “gift” for the Bulgarian leader. I would’ve got him a watch, or a nice pen, but whatever floats your boat. 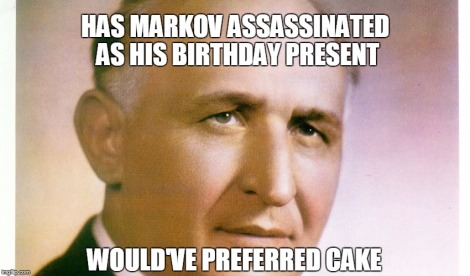 What do you give the guy who has everything? One free assassination…

On that fateful day in 1978, Markov was waiting for a bus to go to his job at the BBC when he felt a slight stinging pain on the back of his right thigh. Was it an insect bite? Surely not in London. He turned around and saw a man picking up an umbrella off the ground. The same man apologised then swiftly crossed the road to a taxi. Totally normal and not at all suspicious behaviour if you ask me. I drop umbrellas in the street and run off into taxis every other day. When he arrived at the BBC, Markov noticed a small red pimple at the site of the sting, and was admitted to hospital that evening after developing a fever. He died four days later. Post mortem examination of Markov’s body lead to the discovery of a tiny metal pellet about the size of a pin-head embedded in his thigh. The pellet (made from platinum and iridium) contained traces of ricin, a deadly poison produced in the seeds of the castor oil plant, and thrust back into popular culture by Breaking Bad. The pellet was originally filled with 0.2mg of ricin, and was covered with a specially designed coating that would melt at body temperature, releasing the poison into the surrounding tissues. 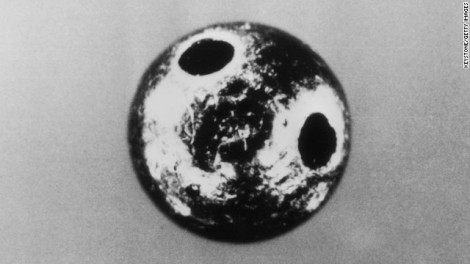 Unfortunately for Markov, there was (and still is) no antidote for ricin poisoning. Supportive care can be provided in an intensive care/high dependency setting, but the best thing you can do is avoid it in the first place. The weapon that launched the pellet was thought to be the umbrella identified by Markov, hence the incident became popularised as the “Umbrella Murder”, though the ricin pellet may have been injected with a hypodermic needle or fired from a pen device. Former KGB agents had confirmed that a similar umbrella device had been designed, though dropping the umbrella in this case could’ve been a distraction, and it’s likely that we’ll never know how the pellet was delivered. As of 2005, Francesco Gullino is the prime suspect in the case, though he denies any involvement. Why would he? If he did it, he has already gotten away with it. 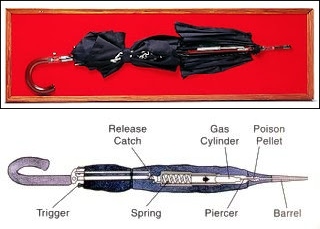 A potential design for the “umbrella gun”

You couldn’t write this kind of James Bond-Cold War Thriller stuff! Well, Ian Fleming did, but I maintain that fact is better than fiction. The sad thing is that the families of these men will never see their killers, or the regimes that ordered their assassinations, brought to justice. Nor will any of us, I imagine. So what if Putin got fed up with Litvinenko and had him killed? It’s unlikely that any meaningful action will be taken against Putin, given his importance in the Western crusade against Islamic State/ISIS/ISIL/Daesh, or whatever the hell we’re calling them these days. Is he the lesser of two evils? It’s hard to tell given the extent of our knowledge about his rise to power, and the vast amount that we still don’t know about him. The internet loves to poke fun at him for his ridiculous propaganda campaigns, but do not underestimate him. He might even be more dangerous than Boris Johnston.

Career update: I can report some interview success! I have been offered an Academic Foundation Programme post in Northern Ireland, starting in the South Eastern Trust. I will have 5 four month clinical rotations, covering general medicine (two of this one), general surgery, haematology, geriatrics, and a four month period set aside for research. I don’t know which QUB research group I will be joining as of yet, but I am still holding out hope for molecular pathology. Two more years in NI, then I’ll probably head off to England. And after that, the possibilities are endless.