Hello again, for the second time today. Thankfully I survived the train, and I’m hear to bring you my news, as I watch the engadget show on my media centre (which remains nameless, and is still working well). The week has been busy as usual, but still pretty good. Firefly viewing resumed, and we almost got through another disc. As far as Sci-Fi shows go, it really is up at the top, and only keeps getting better as time goes on. I really need to improve my writing technique – I’ve been working on this entry since about 7.30, thanks to numerous distractions.

As far as gadget news goes, engadget is my regular source. They cover everything from laptops, smartphones and ultrabooks to all the weird and wonderful of the gadget world, and aggregate everything into one easy to navigate site. And since last June they’ve also had their own web show, and of course I discovered it through an XBMC app. I’ve watched a few episodes so far, and they are very good quality and cover a good variety of gadget, and some interviews with celebrities. The last episode I watched consisted largely of an interview with Steve Wozniak (aka the woz) which was excellent – he does a lot of crazy stuff, and actually carries three iPhones around all the time. The tech reviews are good too, and fairly comprehensive. 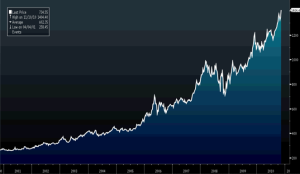 Gold prices over the last 10 years

I’ve started collecting ingots of various metals, partially out of interest, and also to have some sort of reserve in the case of the price increasing of any of them. Comparing them side by side to see all the different densities of the different metals is interesting, and they do vary a lot – silver is the most dense metal I currently have, and titanium is the least dense. I also got hold of a 1kg bar of copper to have in reserve, just to put some money away in a different form. Precious metals, and even some base metals like copper have seen massive price hikes in the last few years, and seem to be still on the up. Anyone who put money into gold 5/6 years ago is probably laughing now, because during times of economic turmoil, people turn to investment in more solid assets; gold being the most popular precious metal at the moment.

Onto, less serious matters, and more gaming related ones. Abe’s Odyssey follow Abe, one of a race called Mudokans, who is enslaved at a meat packing plant. When profits start to decline, the Glukkons running the plant decide to search for a new source of food, and decide the Mudokans would be perfect. It’s up to you to save your race from extinction. And first off, Abe’s Odyssey is a very good game, and one that everyone should play. There are some caveats, of course. This will prove to be one of the best, and one of the most hair-pullingly and head-bangingly frustrating games you will ever play. Everything is designed to screw you over, particularly if you plan to save all 99 Mudokans in the game, and there is no quicksave option. So many times I found myself playing through a section for a solid 20 minutes, only to slip up and be killed by something ridiculous like a solitary bat or an oddly placed mine. And that’s you all the way back at the last checkpoint. If you’re in my house when I’m playing it, you’ll probably hear me screaming and cursing at the computer, and you will know exactly why that is. I’m yet to complete it, but I’m working on it.

Abe’s Exoddus is next on the list, and was released just a year after the first game. This time you find out that a company has been digging up the ancient burial grounds of your race to harvest the bones, for the purpose of producing Soulstorm Brew. So it’s fairly similar to the original story wise, and follows the same format – 2d platformer with many puzzle elements. But the biggest improvement of all is the addition of Quicksave! No longer do you have to live in constant fear of losing massive amounts of progress every time you die or make a mistake. It may seem like a minor addition, but it really makes all of the difference at the end of the day. There are also a lot of additional elements allowing for even more complex puzzles. There is a lot more management involved with the Mudokans this time too. If they are sad, you have to cheer them up. If they are euphoric you have to slap some sense into them. If they are angry, you have to apologize. Being able to talk to lots of them at a time also helps, as rescuing them takes up the bulk of the game. If you’re not familiar with the game mechanics (my catchphrase I believe), it involves a voice command system allowing you to talk to members of your race and order them around in order to eventually save them. There are also some challenges in game which consist of matching a pattern played to you in order to progress in the level. Overall I think it’s a good improvement over the first game, and a lot more accessible to first time players.

Where do I start with this one…I was challenged to complete this, and it has become the bane of my life so far. Infuriating, and supremely addictive, you are trying to climb a tower to heaven but the supreme being isn’t too happy about that. As a result, he keeps making it more and more difficult to progress in the levels by adding laws which you have to obey. Disobedience means your life, and the terrain is also quite treacherous at the same time, making for a very challenging game. The old school graphics and soundtrack are a refreshing break from modern gaming, and the fact that it’s available for free download makes it even better. Whether I’ll actually complete it or not is another thing all together, as it requires much skill and patience. Frustrating games seem to be my gaming theme as of late.

Also worth a look is Tim Schafers new game, which is being funded through Kickstarter. Why is this important, you may ask. Most game developers have to be tied to publishers/distributors for the simple reason of moolah. You need money to develop games, lots of money in most cases, and you are ultimately submitting to the will of the publisher. They decide whether the game is released in the end, and can pull it in directions you may not have wanted. Since the game will be financed through crowdfunding, all of the money can go straight into game development, and the documentary following the entire process. It also means that we can buy in early for a discounted price on the game, and access to the documentary following development as it’s released. It is going to be a classic point and click adventure game, and have an 8 month development time.

That’s pretty much everything for now, and hopefully it has been interesting all-in-all. If not, then you aren’t reading closely enough. Feel free to comment as always!